This is why Bottles is about to leave Flatpak

Wait, this article is obsolete, there have been some changes of decision and I invite you to read this comment.

Bottles was born as an absolutely non-pretentious project in 2017, it was mostly my personal need. In 2020 I decided to give new light to the project, aiming to offer a new concept of Windows in a bottle.

Since that day the project made many steps, many people have joined me contributing with concepts, ideas, translations and code.

To date Bottles is a grown project, its v3 brings with it many bugfixes, improvements and a solid foundation. As announced months ago, work has begun on Bottles v4, a complete redesign of the project. In fact, under the hood, everything changes. The project has been split into two libraries ( libwine and libbottles), the system components, dependencies and installer are being rewritten too. In short, a really new project from scratch that is proceeding in small steps but of which I am proud, really proud of it. 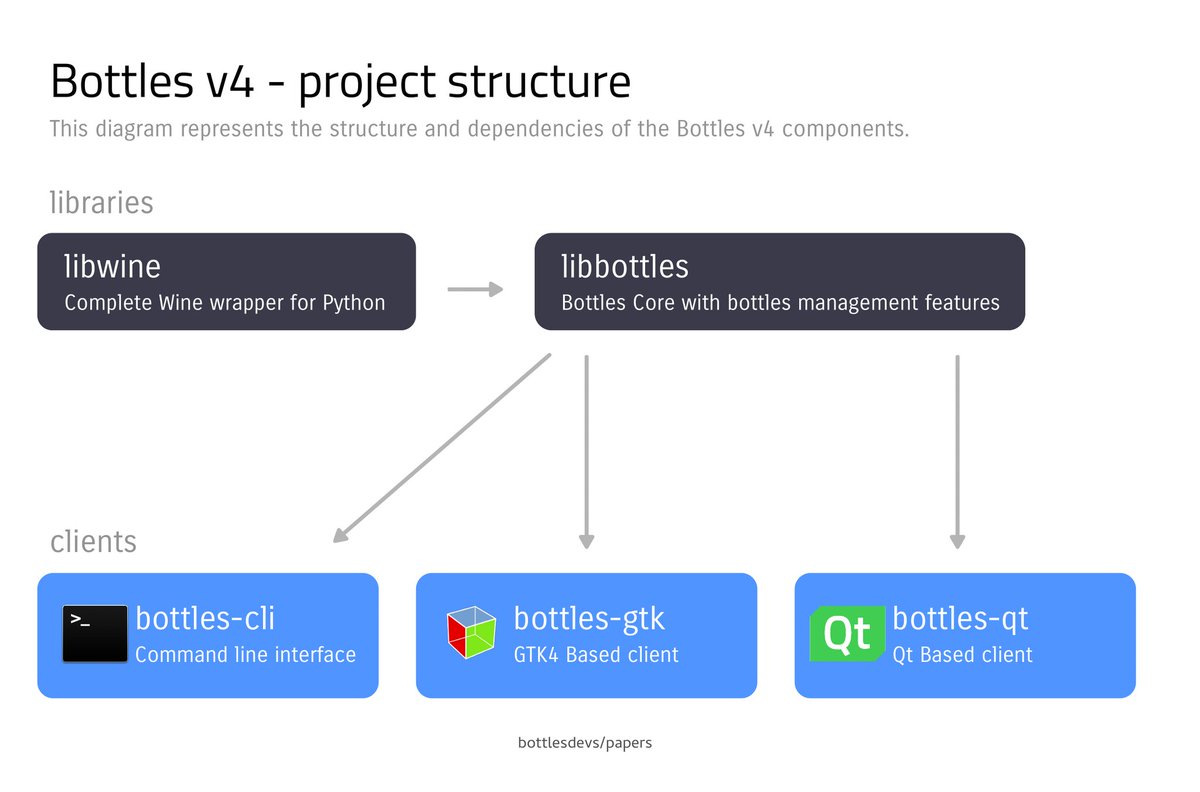 Bottles is currently distributed in multiple formats: AppImage, deb, snap, flatpak, AUR and rpm. We can say that we have managed to reach more users than we ever expected and I am grateful to all those who have contributed with a constructive report. Special thanks to all of you, words are not enough.

The work behind Bottles

Bottles is a project that takes a very long time, really a long time.

Just applying the new translations requires revision on my part, I have to check that these have not been vandalized and do not contain bad words. Several users contribute to the translations by suggesting corrections, these too must be manually verified and approved.

Dealing with bug reports and new feature requests also takes a lot of time. Unfortunately not all users know how to open an issue in the correct way and often they provide not enough details to understand the problem. Then a conversation begins trying to understand the problem, asking for more logs (possibly in English … seriously provide them in English, a small part of me dies every time you publish a log in any other languages). Often a log is not enough and we have to replicate the user’s steps to identify the problem, creating a VM with the same distro, desktop environment and package. Sometimes we are lucky and can easily replicate the bug and this is confirmed and fixed within a maximum of one day depending on its severity.

But when we are not able to replicate a bug then we start a research phase in the code to try to imagine what may have caused the problem. If this step also fails, the bug is reported as “not replicable” and remains there until new details emerge. We are never happy (really NEVER) to give up on a bug but when it is not replicable, we have no other choice.

Each new feature request is analyzed and if the need is high, an investigation begins to understand if this feature can be easily integrated and if it can improve or worsen the UX of the software. It often happens that we have to give up integrating a new feature as this is not compatible with the current project structure and therefore is stalled, waiting for the next main release, which could allow the integration of the feature.

Ok, I have described the management of any Open source project (and not) but in this case it is a project designed and developed by a single person (me). Ok there are many contributions received and I’m not complaining, indeed thank you again seriously, please continue. Unfortunately, however, none of these contributions take place on Bottles v4 or in the management of the Issues or in the revision phase of the translations.

Ok.. What about Flatpak?

Flatpak is currently the package that I personally use less and of which I have less knowledge. Most of the bugs reported are related to the Flatpak version of Bottles and I really spend many days figuring out how to fix them, this because of my little knowledge about it.

This lack of experience of mine, plus the reduced time I have due to what I have explained above (and my job), means that I cannot focus on developing Bottles v4 as I should, slowing down the project drastically.

I also see that the Flathub user community (the repository where Bottles is distributed) is very demanding (and sometimes annoying). I browsed the Bottles reviews on GNOME Software and was very amazed to find that alongside some positive reviews, there are others that are very negative and unfortunately absolutely not constructive. Stop everyone, I know what you are thinking and no .. I do not expect only positive reviews and I am much happier to read negative ones as these help me to grow and improve. Unfortunately, however, these criticisms are not constructive and often complain about Wine problems instead of Bottles.

Bottles is NOT Wine: this is what I have said over and over again. Bottles is a Wine prefix manager, with several features but it ends there. We don’t promise to run Windows software that doesn’t work with Wine, and we don’t claim Bottles is THE definitive way to do it. Unfortunately this simple concept does not enter their heads and I find myself being judged on third party software instead of my own.

I have also read criticisms related to the decision to remove Winetricks from Bottles. Regarding this decision I have spent many, very many words and I have explained over and over again the reason that led to this choice so I will not explain it again. I will just say that the intention to remove Winetricks was announced a little over a year ago, it was also announced in Bottles itself with an alert. Winetricks is no longer present in Bottles since 2.1.

I hope it is clear to everyone that Bottles is not Wine.
Bottles is a simple, intuitive and feature-rich (e.g. bottle versioning, DXVK, dependencies management and more) wine prefix manager.
With v4 we will introduce our installers to which we will give official support.#linux

Bottles is not yet another Wine prefix manager, there are already many similar (and perhaps better) tools that share in how they work and the tools they offer (including Winetricks) and my intention is not to create a program which already exists, otherwise I wasn’t wasting my time.

So .. back to the Flatpak issue. In the next few days I will officially remove Bottles from Flathub, preventing the receipt of future official updates. This means that Flatpak itself will no longer be one of the project’s official distribution channels and official support will no longer be given on that package. The Flathub beta repository is currently maintained by third parties who take care of keeping it aligned with git, however even this will no longer be officially supported.

Don’t hate me but personally I feel relieved by abandoning Flatpak. I understand many of you will disagree but it is my time and my sanity (which is compromised when I try to fix a bug in Flatpak).

Officially yes, I will no longer officially distribute Bottles via Flatpak. Anyone feel free to republish and keep it, with patches and updates, but this one will not be officially supported by the project. It will still be possible build the Flatpak from source and install a local copy, I will keep the manifest updated to the current version.

To be clear: we have not abandoned #Flathub forever, we are simply looking for someone to take responsibility for it, allowing us to continue developing Bottles without depending on the problems of a single distribution format. 🥺

I’d like to end this post, clarifying once again that Bottles isn’t just a Wine prefix manager and that I want a lot from this project. I understand that many see it as just a pretty face on top of a regular Wine prefix manager but it’s not the same for me. I have big plans in mind and I want to realize them all and above all in my own way, as it is my idea and my project. I want to revolutionize the way Wine is used in managers and I want to do it my way.